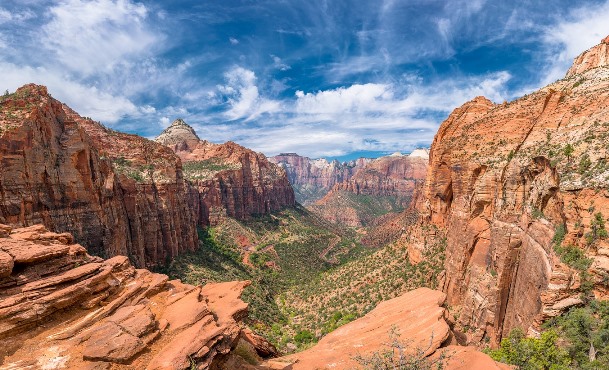 In the 1970’s, there was a seemingly unbridgeable canyon between the religion of Islam and western universalist Sufism: the successors of Hazrat Inayat Khan, and the Dances of Universal Peace. As an early convert to Islam from that generation of seekers, I experienced this yawning gap between realities first hand. Three of the rare pioneers who kept crossing and recrossing it were my Shaykh Nur al-Jerrahi/Lex Hixon, Saadi Neil Douglas-Klotz, and Imam Bilal Hyde. Over two decades later, as a  comfortable, non-hijabi, Irish-fiddle-playing yet observant Muslim, I watched Imam Bilal tell an audience, “I never thought I’d be talking about Arabic grammar to Dancing Sufis.” The canyon was being filled in.

People juggling these seeming opposites can veer between extremes: annoyingly rigid at one time, fatalistically lax at another, possibly giving up the whole project as hopeless. Two hadith provide comforting guidance on this point: “Make Islam easy,” and “Do not overdo this religion or it will overwhelm you.” Yusuf Islam, formerly known as Cat Stevens, developed from free spirit to strict Muslim, then found a middle ground. After hearing beautiful traditional music from suffering Bosnian Muslims, he re-embraced instrumental accompaniment. Another musician who did something similar was Dawud Warnsby Ali.

In the 1990’s, my family loved Ali’s Muslim children’s music. A few lyrics worried me, though. The glorious “Sing, Children of the World” scanned the lives of kids in Muslim and non-Muslim countries, proclaiming, “Allah/Islam will unite us all.” That’s fine, as long as it’s understood that ‘other’ world religions and personal connections with nature, science, and art can be Islamic in the broadest sense, examples of, “We will show them our signs on the horizons and within themselves until they believe,” and “There are as many ways to God as there are human souls.”

As I recently watched a newer version of “Sing, Children of the World,” Ali’s spoken introduction startled me. “Now, I’m so sorry.  So many of you were brainwashed with that song as children.” The audience laughed.  But the chorus had changed. “Allah/Islam will unite us all,” had become, “Our youth/the truth will unite us all.”  That’s fine, though I miss the resonant word “Allah,” which means “God” to Arabic speakers of any religion. But there’s more middle ground than there used to be. More bridges are being built and more travelers are crossing over. The canyon is being filled in. Alhamdulillah.

Here’s a version of the album titled Sing Children of the World.

Sing, Children of the World: