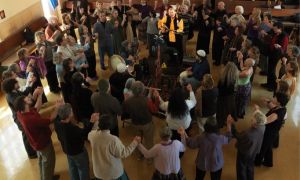 Zikr is the Sufi Ceremony of the Remembrance of God, a traditional ecstatic practice of the Sufis, as observed by the order of the Sufi Ruhaniat International.  We will be singing very old sacred phrases in Arabic.

Bismillah – “We begin in the Name of Divine Unity”
La illaha illa‘llah – “All of Reality is contained within Divine Unity”
Hu – “Divine Unity is constantly vibrating into all forms, in all times and places.”

This practice is noted for producing strong expansion of consciousness. It was one of the central practices of the Persian poet Rumi, allowing him the divine expansion and insight from which he spoke his inspired poetry. Both beginners and those with experience can gain enormous benefit. The Sufis frequently refer to Divine Unity as the Friend, and seek an ongoing relationship of extreme intimacy with the Friend.

The zikr now begins at 7 PM with basic orientation to practice, history, and the teachers and people of the Ruhaniat Sufi Order. This will be mostly songs and stories, with very little lecture. Sufism is vast and a little information at the beginning can be of great help in navigating it.

For those who think they might like to try this we say, “Of course, not every practice fits every person.  If you come you will know after ten minutes whether it is affecting you or not.  Our agenda is: that every person discover an effective way of entering Divine Presence.  To us, the most important thing is that you find a way that works, not that it be our way.  Keep searching until you find!”

This event is free and open.